27th August, 2020: SSC has released the additional result for SSC CHSL 2018 Tier II on its official website in the form of PDF. The result contains the names of only those candidates who are qualified for the DEO skill test.

Approximately, 1741 candidates can attempt for DEO in CAG and for LDC/ JSA and PA/SA the number of candidates are 30822. The names of students who were disqualified on the ground of unfair means (UFM) are also included in this result.

5th August, 2020: Through this result SSC has also resolved the dispute related to SSC CHSL 2018 Tier II, in which 4560 candidates were disqualified due to unfair means (UFM). The disqualified students are also given one-exemption according to UFM rule.

21st July 2020: SSC has revised SSC CHSL 2020 exam dates of Tier I of remaining shifts. It is expected that the exams of SSC CHSL 2010-20 may be conducted in October in different dates.

22nd May 2020: SSC announced that exam dates of SSC CHSL 2020 will be revised and will be notified after 1st June.

Every year SSC conducts many national level exams and SSC CHSL is one of them. Eligible candidates are recruited through SSC CHSL exam in various posts. Here is an overview of the examination below:

Every year SSC published its notification regarding SSC CHSL Exam. A notification was released on 3rd December, 2019 for SSC CHSL 2020 exam.

Candidates are advised to keep your attention on this page for latest information on SSC CHSL exam dates and admit card. Different important dates are listed below:

The candidates willing to appear in the upcoming SSC CHSL examination must have an idea about eligibility criteria. The criteria needed to be eligible for SSC CHSL exam is given below:

Candidates must successfully have completed 12th board exam or any equivalent degree from recognized board or university.

Age between 18-27 years is preferable, though there are some relaxation for certain categories. Relaxation of age for different categories are:

Must be a Citizen of India, Nepal and Bhutan with some condition. Candidate from Nepal or Bhutan must came in India before January 1, 1962 and settled in India permanently.

The candidates who are interested to appear in SSC CHSL exam need to get register yourself. The following steps must be follow for registration.

After successful registration you will be asked to upload your recent passport size photograph and signature.

Here, you have to give communication details, educational qualification details etc. You will also have to enter post preferences.

You can make your payment via online as well as offline an amount of INR 100.

There are 4893 vacancies for SSC CHSL candidates in different posts. SSC recruits candidates through SSC CHSL exam which has All India Service Liability (AISL).

This imply that the selected candidates may be posted to serve anywhere in India. Vacancies of different posts for SSC CHSL aspirants are:

SSC CHSL Salary according to their Posts are listed below:

Section-wise Number division of the SSC CHSL examination for Tier I is shown below:

Total number of questions asked is 100 with the total marks of 200.

You must have idea about cut-off of previous years. Through Cut-offs you can make an assumption that how much the may be tough. Cut-offs of the previous year given:

Admit Card of SSC CHSL 2020 for Tier I exam will be available on their respective regional official website of SSC (Staff Selection Commission). To get your admit card you can use Registration Id, Date of Birth and Roll Number.

Hall ticket is mandatory to enter in the examination center. Admit card for each Tier is released separately. Only qualified candidates of Tier I exam can download the admit for Tier II exam.

SSC declared the result of SSC CHSL for different Tiers separately. Candidates can see their result from regional official website.

Ans: SSC CHSL is a multi-stage examination and it consists three Tier viz. Tier I, Tier II and Tier III. You have to clear all the Tiers for final selection.

Ans: Yes, negative marking is applicable in SSC CHSL exam and one mark will be deducted for every wrong attempt.

Ans: Not all Tiers are conducted in online mode. Tier I is an online exam but Tier II and Tier III is descriptive and skill test respectively.

Ans: General Category have to Rs 100 application fees for SSC CHSL exam. But female, SC, ST, Physically Handicapped, and Ex-Servicemen are exempted from paying any amount. 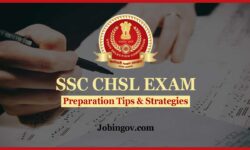